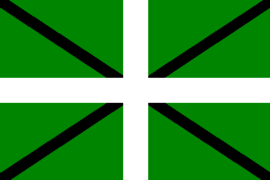 The flag of Lost Legion

Lost Legion was known by the name No Homers until May of 2005. It was originally founded by Greasy and Spuz, of the Flying Hellfish, at the start of Midnight Ocean. They had broken off from the Azure flag, Fortune's Fools. Rum 'n Blood D'Oh was the first crew to join, followed not long after by the Knights of Sloth and then the Diamond Dogs. There have been many crews swaps and name changes since then. No Homers originally tried for the Islay of Luthien, against Carpe Noctem and Ruby Phoenix, but was unsuccessful in this bid for island ownership. They colonised Gaea Island in the Emerald Archipelago late 2004, and successfully blockaded Endurance Island of the Opal Archipelago a few months after that. The No Homers merged with Knights of the Republic in May 2005 to form Lost Legion.

On July 24, 2005, Lost Legion merged with Northern Lights to form Heavens Aligned. In an attempt to win Lagniappe Island, the flag lost Gaea and started to unravel.

On August 30, 2005, The Imperial Fists and the Knights of the Republic broke away from Heavens Aligned and reformed Lost Legion.

On January 14, 2006, the remaining Imperial Fists, who had also joined Notorious Fandango, merged into the Knights of the Republic.

No Homers/Lost Legion was home to many crews during its lifetime, including;

The following pirates were monarchs of No Homers and Lost Legion: