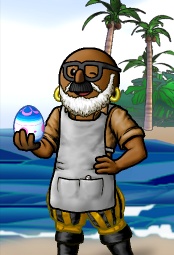 Korr is a senior officer and drunk of the crew The Lost Lot and was king of the flag Candy Coated Chaos. He sails the Sage Ocean.

Although he first began pirate life on Viridian, where he was known as Tweedledumm, Korr moved his base of operations to the Sage Ocean when it opened, helping to found one of the ocean's first player-controlled crews, The Lost Lot.

Once there, he helped build The Light Brigade into an early and formidable force, acting as a chief diplomat and recruiter. Although the flag later dissolved after achieving the early goal of capturing one of Sage's first islands, his role as diplomat has served him well since, as the good relations he maintained with former The Light Brigade crews have played a major role in the success of his crew in achieving its more recent goals.

Although he owns and manages a number of stalls across the ocean, he is better known for his enthusiasm towards blockades, and he now serves as a key conspirator in Candy Coated Chaos, continually seeking out new challenges. His forum name is Korrrr.