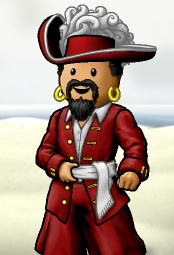 Kleenex joined Puzzle Pirates in November 2005; today, Kleenex is a senior officer in Hardcore Sea Ravers on the Sage Ocean.

Kleenex washed up upon Descartes Isle in one winters evening in 2005, where he first joined the crew, The Red Flag, meeting many friendly pirates and new friends. During the course of 2006, Kleenex and Barbarellabe formed the crew, The Hearties Of Sage, which subsequently joined the flag, Muro Ami for a while, before joining The Red Flag Armada.

Following the disbanding of The Red Flag Armada, Kleenex concentrated on growing his crew, gaining many great members and friends, such as Anamii, Cruarch, Dettol, Fildendron, Minaa and Pundit. After a year of fun and adventure, The Hearties Of Sage disbanded on July 9, 2007. Following these events, Kleenex became dormant from the game and eventually vanished from the ocean.

Clock Work and Beyond

In June, 2010, Kleenex returned to the ocean, and set to work rebuilding stats and obtaining ships. during this period, Kleenex joined the crew Hardcore Sea Ravers