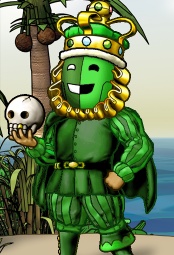 Johnathan's is a pirate on the Midnight Ocean. He is the a Senior Officer of the Dream Chasers as well as a member in the flag Curse of the Black Pearl .

Johnathan first came into the pirate world in late 2006. Rumors have that he escaped the hangman's noose after a misunderstanding with a governor and his daughter in a distant colony. He proved his loyality and skills early on and eventually rose within the ranks of his first crew Big Bro' to Senior officer. During the disbandment, he teamed with Ardea and Hazelnut in order to create the West Diamond Trading Co. His role within the crew is that of recruiter, as he tends to run greeter pillages on a fairly regular basis. When on land, he can be found pounding his balls at his stall on Cnossos as well as docktarting around at the local inn, searching for new creative ways to earn poe.