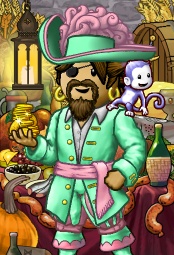 He started his pirate career on the Meridian Ocean where he soon joined the crew Sweet Tarts. Jimmyjones loves to talk with crew members and help a fellow crew member in need. He will laugh at almost anything that is said. Jimmyjones now resides in the crew Silver Dragons and the flag Dragon Lords. Jimmy later moved to the Obsidian Ocean a few days after it's opening. Jimmyjones currently plays on the Emerald Ocean and is the current governor of Scrimshaw Island on the Emerald Ocean

Beginning of his pirate career on the Meridian Ocean

In the beginning when Jimmyjones started playing his pirate career, he washed ashore on the Meridian Ocean. It was there he found a small crew called Sweet Tarts earning the rank of pirate after joining. He befriended the then senior officers of the crew Qwertibob, Luckyliza, Wayfarer, and Gulpofbilge. Not long after, he earned the ranks of officer and soon fleet officer. Not long after the current senior officers of the crew decided to break away from the then captain Petedapirate and create a new crew after its namesake, Sweetarts. Upon joining the new crew and following the former senior officers of the old crew, he earned the rank of senior officer himself. The crew was big on their Cursed Isles runs and their love of sword fighting and a good games of spades. 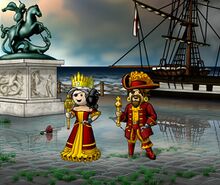 Over the years of being in Sweetarts he wanted to branch out into the pirating world and meet new faces and learn new things. Jimmyjones floated around from crew to crew, learning of their great experiences and way around the game. Soon after he meet the pirate by the name of Esaidra and joined the crew Silver Dragons. From there he learned how to blockade. He earned the rank of senior officer not long after joining and befriended the majority of all the crew members that would come and go. Jimmyjones would then go on to become a prince in the flag Dragon Lords and become the former governor of Olive Island up until it was taken in a blockade.

Once the decline of the Meridian Ocean began, he soon moved over to the Obsidian Ocean up until its demise. Once returning to the shores of Meridian, he soon learned that the player base had moved their roots over to the Emerald Ocean or had retired from the game.

Jimmyjones on the Emerald Ocean

Jimmyjones soon washed ashore on the Emerald Ocean and met up with a former hearty named Foxglove (Malificent). There he joined her crew and earned the rank of senior officer. From there they would plan Christmas events from their flag to have fun and enjoy themselves. Soon Foxglove became dormant and Jimmy ran into a former senior officer from his old crew Silver Dragons from Meridian. He joined Slice of Life and became senior officer and lord of the flag. He is the current governor of Scrimshaw Island on Emerald Island. 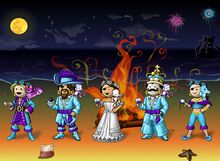