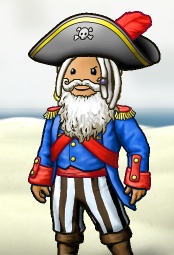 Insurence is a pirate on Sage Ocean. He’s a officer of Shooting Stars of Sage.

Insurence has been the captain of several crews. The first was Insurence's Dark Navy. With this crew he merged and got expelled. The second crew was Insurence's Fleet. Then he met Chickenfeed and the two became good friends. Then they merged cause Chickenfeed (who was captain of Swig o Rum) wanted to go play Runescape for a while. So the two agreed that when Chickenfeed came back that he could be captain. So Insurence was promoted to captain and monarch.

While Chickenfeed was gone Insurence greatly improved the crew. When Chickenfeed came back Insurence returned the crew and flag. So Insurence made a new crew and named it Apocolypse. Then he got tired of being a captain and merged his crew with Dredred's crew, Skull and Crossbones.

After doing nothing for three months he created yet another crew and named it Eternity. This crew rose quickly and had 60 members by day three. Eventually he grew tired of this crew and sold it for 25,000 PoE.

Soon after, he created another crew named Impending Perfection. This crew was not as successful as the last. It only got up to 35 members. So by now Insurence was very stressed from being a captain, and sold the crew to Zod, the captain of The Sons of Jor-El. And as of now Insurence is a senior officer is this crew and maybe he will stay there for a while.