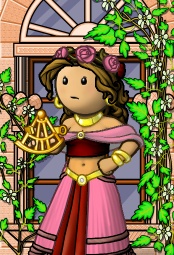 Hazelnut is a pirate on the Midnight Ocean. She is a senior officer of the crew West Diamond Trading Co, and a lady of the flag Cold Fire.

Hazelnut joined the pirate world in 2007, when she fell asleep on the deck of a ship one sunny afternoon, and woke up in port on Epsilon Island. She moved to Jet Archipelago and joined her first crew, Big Bro', with Yanou as her captain, on December 1st, 2007. Later, she moved to Beta Island in Sapphire Archipelago. When Big Bro' disbanded in late January 2008, she joined the West Diamond Trading Co, founded by Ardea. In February 2008, she was given a title in the flag Cold Fire.