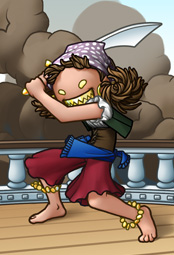 Gretchen Goldfang is one of the original five Brigand Kings introduced to the game in April 2006. Like most brigand kings, she can be fought in either a swordfight or rumble.