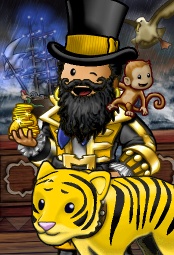 Godoftheseas is a senior officer of the crew Royal Insanity and prince of the flag Death's Nightmare on the Emerald Ocean.

The tale of Godoftheseas began during a time of prosperity upon the seas of the Hunter ocean. A time where dubloons could be purchased for less than 800 Pieces of Eight and the only islands colonized were those owned by the Ringers. It was during this time of prosperity that Seas spent a large portion of his time within the Quatzal navy, flying through the ranks rather than sitting upon the docks amongst dock pressers and petty thieves like majority of the other green players.

After a fair amount of time having been spent upon his stats he decided to join a crew and join the rest of the ocean. The choices were endless as powerful crews from other oceans set twin crews within Hunter to colonize and profit across multiple oceans. During this time the largest crew was a "megacrew" by the name of -Epic- which was the first crew to reach 1000 crewmembers, led by Deathsenemy.

However, the prospect of joining a crew in which he would become a small fish in a large ocean was overwhelmingly repulsive to Seas. It was then that he decided to join a smaller crew, one that was purely Hunter pirates that started up from the beginning. After searching through pillages and the Quetzal inn he finally found the crew that matched him best, Dazeri's Sea Dogs. It was during his time upon Dazeri's vessels that he met two people that would soon grow to become a triumvirate of card sharpened navigators, Ybn and Bounty.

After years of adventures and conquest throughout the Hunter ocean with his trio Seas finally settled down within Dingybeard's crew All For Rum where he remained for 3 years. It was during his time within All For Rum that his experience as a Blockader flourished as the island of Iocane was constantly under attack during its early beginnings after colonization.

Yet after he reached his third year within All For Rum he began to feel the need to join a new crew. The day to day operations of his current crew couldn't satisfy him any longer after he had reached such a lengthy term within it. In the end he decided to create a crew of his own alongside Locko, Ybn, Bounty and Princeawsome to create a large version of his previous triumvirate. This crew, now known as - Situations - is still in development, but will soon turn eyes as the new Emerald Ocean shall see the Hunter players of old return yet again.

Godoftheseas is currently on the Skellie Hunters Across Hunter list.