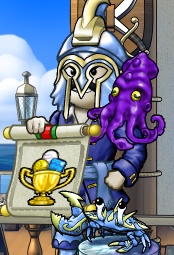 Giannaros is the captain of the crew Royal Shamrock. He sails the Emerald Ocean.

A month later, he joined Scarlet Mist after talking to Pimpernel in Chachapoya's dock. He soon bought his first vessel, Heartless Roach, a sloop he still owns. Giannaros was promoted to the rank of officer shortly after.

He is currently the Captain of Royal Shamrock and a Prince of the flag "The Norse Kingdom". Giannaros almost always sails the seas along with his friend Dimitran.