Difference between revisions of "Expedition" 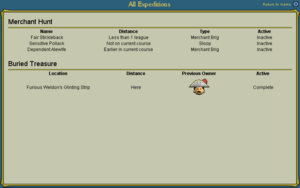 Expeditions are a side-activity that can be found and undertaken during any kind of voyage, except a swabbie ship transport. There are currently seven types of expeditions, which range from hunting down merchant ships, to defending islands from vikings, to recovering buried treasure. They are obtained from brigands and barbarians that have been defeated during a voyage, black boxes, and Explorers' halls. Depending on the type of expedition, pirates can be rewarded for their efforts with Pieces of Eight, plundered booty, a trinket or even a portrait.

All expeditions except Imperial outposts and Viking raids can further be obtained as a random reward for defeating brigands and barbarians at sea while voyaging. News of an expedition won from a brigand or barbarian will be displayed in the Booty Pillaged ahoy, and a new expedition will appear beneath the Yer Expeditions section on the Ahoy! tab, giving information about the currently active expedition.

More information about an expedition can be found on the expedition report screen, which lists all of the current expeditions, and where they may be found. Expedition locations are indicated relative to the ship's currently-charted course. The distance may read:

This defeated ship offers news of an expedition

Any vessel that is not configured for swabbie ship transport may take part in an expedition, provided the officer has all the correct privileges. For example, the ship can only enter a sinking Imperial outpost if the officer is allowed to sail it into sinking battles.

This expedition causes a Brigand King ship to spawn. Defeating it will award a trinket to experienced pirates on board.

Placing a Brigand King Compass on the navigation table will start this expedition. Another possibility is to find news of a Brigand King after defeating brigands or barbarians (a sighting). The expedition scales the difficulty of the Brigand King to match the pirates' abilities.

Note that the Brigand King sightings, which are unlocked through defeating brigands, are slightly different to compasses. While a Brigand King sighting may only be pursued once, a compass may be used to spawn a Brigand King ship repeatedly until a battle has been either been won or lost against it. Disengaging from the battle also allows the compass to be used again.

One type of expedition involves receiving information pertaining to the location of buried treasure. This expedition will direct pirates to an atoll located at a nearby league point indicated by an X on Yer Known World and league tracker - red if the expedition is active, and grey if inactive. Upon reaching the league point, any officer in the crew owning the ship can order the pirates aboard onto the atoll by pressing the "Dig for treasure" button located on the Ahoy! tab. The crew will be deposited on the atoll, and be informed to dig for treasure. Buried in the island, usually near an X of some sort, there is a foraging puzzle station, which allows all crew members to forage for chests.

Anyone with officer privileges aboard the ship can order everyone to leave the island at any time from an option on the Ahoy! tab. There will be a message when nearly all of the chests have been foraged, and another when the last chests have been cleared. Additionally, as of release 2013-12-17, once all pirates have finished foraging they will be whisked back to the ship automatically.

As in a normal sea battle, PoE earned will be placed into the booty, with pirates aboard receiving their share, although this is not added to the pirate's total earnings on the pillage summary. When the booty is divided, pirates will get additional PoE from the chests, whether or not they are still aboard the ship. The amount of PoE earned in these chests will be dependent on the number and skill level of the pirates aboard the ship at the time the expedition was won from brigands.

Large expedition atolls may also contain a tombstone inscribed with the words "Here Lies the Old Man of Oyster Island". Clicking on the tombstone will award a trophy.

The Old Man's tombstone
Known lines after landing on atolls

Known lines after all chests are uncovered

Another possible type of expedition involves raiding an Imperial outpost. A map must be purchased from an explorers' hall, which leads to a tiny island denoted with a crown icon in the ocean view. After an Imperial ship is sunk during a sea battle, a swordfight takes place on the island. If the pirates win the swordfight, Pieces of Eight, cannon balls, and rum are placed in the ship's booty and hold.

Another type of expedition comprises sailing to a nearby shipwreck, located at a league point. On Yer Known World and league tracker the wreck is designated by a partly sunk ship icon, again- red if the expedition is active, and grey if it is not. Upon reaching the league point, a "Haul Treasure!" button becomes available in the Ahoy! tab. If clicked, a Treasure Haul game begins. Unlike a Buried Treasure expedition, there are no chests to be hauled. A message and duty report is displayed when all PoE has been hauled from the sunken ship.

A shipwreck map found by opening a black box

These expeditions are accessed using maps purchased at an explorers' hall. The map leads to a tiny island denoted with a viking helmet icon in the ocean view. First pirates man the guns at the shore fortifications, then either a Swordfight or Rumble takes place on the island. If the pirates win the brawl, Pieces of Eight are placed in the ship's booty and hold. 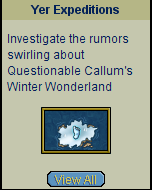 The expedition as it appears on the ahoy panel

The Yeti's cave is somewhere on the island.

Yeti sightings are a type of expedition that can be won from brigands and barbarians while pillaging. The map leads to a snow-covered island denoted with a Yeti footprint icon in the ocean view.

Pirates must search for the Yeti which is hiding somewhere on the island. Nearby will be its cave and a few food-themed furniture items. Once discovered, the yeti grants pirates a free two person portrait which is entitled "Definitive proof of <Yeti Name>". To begin the portrait, click on the portrait easel.

When the pirates leave the island, the Yeti places a number of ice chests, containing PoE, in the ship's booty and hold.

This type of expedition was made available to production oceans with release 2013-12-17.

A bug exists whereby pirates cannot paint the portrait after they have generated a preview, and then made changes. This is because the Yeti enters the portrait with the "ready" box ticked, but will not tick it again. To work around this, pirates must cancel the portrait and start it again.

The following trophies are related to expeditions: