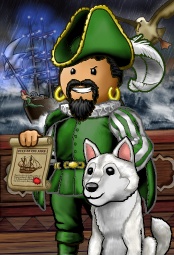 Evilned is a pirate on the Emerald Ocean. He started playing the game in early 2008 but his account was deleted due to inactivity. He recently created another pirate of the same name in October 2012 and is currently playing quite active. He joined the crew Royal Assassins Brigade and is currently a fleet officer.

Evilned commonly goes by the nickname "Evil" and can regularly be found on Admiral Island in the inn, on a flotilla, on a Sea Monster Hunt or running a pillage on one of his ships.