From YPPedia
Revision as of 15:19, 17 February 2012 by Darkwiesten (talk | contribs) (→‎Crew politics: => Aye, a crew's politics will now only change when all of the voting members have completely left the crew. So in the case of an autocratic crew, the captain will need to leave,)
(diff) ← Older revision | Latest revision (diff) | Newer revision → (diff)
Jump to:navigation, search

Crews are the basic unit of social organization. People in a crew can board each other's ships and go pillaging and take other voyages together. There are six permanent ranks (in addition to the temporary rank of jobber), described in the pages linked at right. Each rank gives all of the powers of the previous rank(s) as well as extra abilities. A title can be assigned to members.

To create a crew, you need:

The "Create a Crew" button will appear in the Crew tab of any crewless pirate who meets the requirements for captaincy. Crew names can be between 2 and 24 characters long, and on English oceans, consist only of the letters [A-Za-z]. Crew members will need to purchase appropriate badges as well.

A crew with sufficient fame may create a flag, which can be used to unite several crews. Additionally, on doubloon oceans, the cost for a crew to create a flag is 20 doubloons.

On new oceans, the requirements to create a crew are initially reduced to only require narrow experience in any duty puzzle, and in either swordfighting or rumbling.

Crews have three options for their governance, or politics, system:

A crew's politics may be changed at any time via the procedures of decision-making stipulated by its current politics setting. In all three systems, dormant crew members, including the captain, do not get a vote. If the captain leaves an autocratic crew, the crew automatically becomes oligarchic. If there are no senior officers in the crew who can vote, the politics will change if an event occurs that would post a crew issue (even if it's something that would normally be immediately bypassed such as a senior officer changing ranks). Also, if a dormant pirate is promoted to captain in an autocratic crew, the politics are immediately changed to oligarchic. Crew politics will never automatically change to democratic, even if a crew has nobody ranked above fleet officer.

Crew articles are the rules by which a crew divides booty shares among its members and jobbers after pillaging, its statements, and its politics. These articles are set by a crew according to the decision-making system dictated by their Crew Politics. A crew's articles are viewable on its info page (except the private statement to non-crew members), and the booty share is listed on the crew's notice board listing when a it is hiring jobbers, so that people can decide whether to job with that crew.

If these are changed, a message is sent to all online pirates in the crew (both permanent and jobbing members). If the booty share is changed, any pirates on board a ship will receive an alert stating this, though the booty shares will not change for ships already on a voyage. 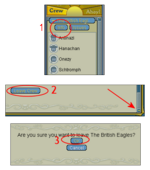 Illustrated steps for leaving a crew. Click to enlarge.

To leave a crew, first open the crew info page. Scroll to the very bottom. There will be a button that says "Leave Crew". When it's clicked, a prompt will come up asking you to verify you are leaving. If you click "OK" at this prompt, then you will leave the crew. If you leave, an officer can invite you back.

Also, if you accept a crew invite from a different crew, you will automatically leave your first crew and join the other one.

If you are only jobbing for a crew, instead of the "Issues" button, there will be a button labeled "Leave crew."

The following options are available for managing a crew. Pressing these buttons has no immediate effect - each of them brings up a second screen asking for confirmation or offering a place to post an explanation.

The last four are visible only to the pirates that control a crew. For example: in an Autocratic crew, only the Captain would see these buttons.

The tools for managing a crew are located at the very bottom of the crew's info page.