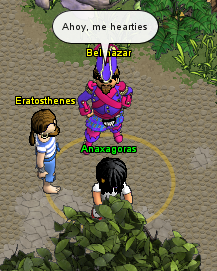 A chat circle in action

A chat circle is a way to communicate with other pirates who are in the same scene, via the /speak chat channel.

A chat circle is automatically formed when one player clicks on the circle around another pirate, pet or NPC, clicks on or in a pre-existing chat circle, or offers a trade or challenge - provided it is possible to create a chat circle at that location. The pirates will stand in a circle, the outline of which can be made visible by hovering the mouse cursor over it, and may then chat with each other via the /speak channel. As long as there is no physical problem with a chat circle being expanded, such as an obstruction like a building or another chat circle, more pirates can join the circle and talk freely to everyone in that circle. Any pirate not in the circle will be unable to hear the chat no matter how close they stand.

Pets may join and leave chat circles. When following an owner, they will join and leave circles as the owner does if it is possible. While a pet is roaming, one or more pirates may form a chat circle with a pet. When joining or leaving a circle, pets will speak a word or phrase into the chat circle which all pirates can hear.

Visibility of chat messages in scenes