The front of the box edition.

The box edition of Puzzle Pirates, published by Ubisoft, can be found on store shelves for 20 US dollars.

Those that buy the box edition of the game get an offline version of the game where they can practice bilging, sailing, swordfighting, and alchemistry, a non-decaying, non tradeable in-game item (their choice of either the backsword or the savvy hat) for each of their pirates, and a free month subscription to the online version of Puzzle Pirates. Those that preordered the box edition also received a deck of Puzzle Pirates themed playing cards (with Ocean Masters and developers as face cards) and a chance to win some things from a sweepstakes. 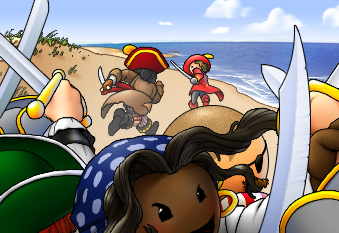 A scene in the story mode

As an introduction to the puzzles before playing online, the box edition contains a mode with a plot. The player assumes the role of an anonymous mate shanghaied by the navy. The story progresses with each new puzzle difficulty level, with dialog appearing continuously through the puzzling, much like the chat interface in the online game. After some level of mastery is shown in each puzzle, a new one is introduced. Once a chapter is completed, a score out of 100 is given, and a new puzzle is unlocked in the practice mode. When the player is familiar with enough puzzles, the use of puzzles in the story emulates a standard pillaging trip.

Chapter 1: The protagonist and their bar friends have been pressganged into the Royal Navy to bilge, while the officer taunts them with the fact he stole a sacred cookbook that Louise (one of the bar flies) has in her possession. The protagonist is left behind to drown after a pirate attack sinks the ship. The pirates save them.

Chapter 2: The protagonist wakes up and has to learn how to sword fight. They proceed to bilge and sail for Captain Coriander's crew. He talks about wanting to join the Feaster Island cooking contest.

Chapter 3: Captain Coriander chases down some merchant ships for ingredients for his cookoff, culminating in a swordfight. He declares that leeks are what will complete his version of the legendary dish mentioned in the sacred cookbook.

Chapter 4: While waiting at an inn and planning their next move, an old salt tells Coriander that Flambe has blockaded the island where the cooking contest will take place. The crew make their way towards an island where the witch Mesmer lives. She teaches the protagonist how to use alchemy, then hands them a whisking potion. She alludes to Coriander's tendency to heavily modify stuff.

Chapter 5: The Coriander crew sneak into the cookoff pretending to be from the Thousand Island Navy with a French accent. Commodore Flambe boasts her best dish is some blackened chicken. Coriander submits the recipe from the sacred cookbook, which is cayenne pepper chicken. In a temper, Flambe declares the contest isn't fair, before running off with Coriander in pursuit.

They do escape the Royal Navy but land on a deserted island, after which the game ends with a notice that the adventure continues online.

In addition to playing along with the story, owners of the box edition can play any of the four included games offline once they have been played in story mode. Tutorial, tips, and star levels are included, and the player can continue as long as he or she likes.

When the box edition was first announced, a pre-order drive with a raffle for five different prizes was run. The five prizes were[1]: