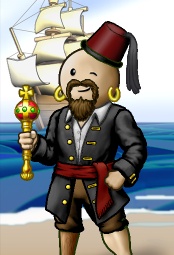 Bosunpete is a pirate on the Midnight Ocean, sailing with Infernal Infidels under the flag of Midnight Armada.

Bosunpete began life as a beta tester on the Azure Ocean. When the sun set on that ocean and dawn broke on Midnight, his crew and flag became defunct and Bosunpete found The Privateers. He rose through their ranks, eventually becoming their fourth captain. He became a senior officer in Infernal Infidels when the two crews merged in November 2005. He also rose in the ranks of their flag, Midnight Armada. He was the second governor of their second island, Park.

He currently enjoys the rank of prince and is once again governor of Park Island.