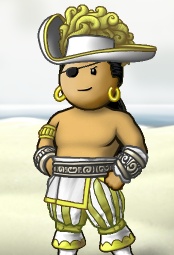 Blazegreg is a pirate on the Viridian Ocean.

Blazegreg started playing on April 23, 2005, on the Cobalt Ocean. When his free trial ran out, he moved to the Viridian Ocean. Although he was worried about the move, he ended up doing far better on Viridian than he ever had on Cobalt.

In July 2005 he entered his first blockade, Viridis I. His ship sunk during the battle and he was washed ashore sporting a brand new eyepatch. Later that month he married Pandaxee in-game. Sadly, it wouldn't last; irreconcilable differences resulted in divorce in December.

Blazegreg considers anyone with an eyepatch his pirate brother or sister. One of these pirate sisters is Bluediamond, who is married to Witco.

As the end of Summer 2006 approaches, he gained three new friends: his pets, Tigga the cat, Kingblaze the rat, and Captain the dog.