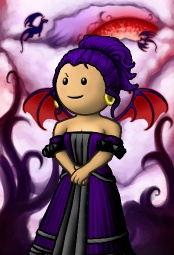 Bisca is captain of the crew Cute Sexy Dangerous and queen of the flag Toxicated on the Emerald Ocean.

Bisca started this game (somewhere in June 2012) because her boyfriend, known as Poefarmer, lured her into it. She was feeling a little bit held back about the game but after a little while she became highly addicted.

When she first came here her attitude was a little bit off, "No touching or I'll stab you, don't give me a nickname! My name is Bisca, just plain Bisca." Ofcourse this brought many laughter and a few enemies but also a couple of friends. These friends such as Daftsadie and Zorado dragged her into the crew Royal Assassins Brigade, led by fine captain and king, Goadreamer. Here she learned how to take her first steps.

By pillaging and trying a few puzzles she became very interested in Carpentry which became her favorite puzzle of all times, with Foraging following very close behind it. After a while she started to develop a certain "love" for Cursed Islands and Sea Monster Hunts. Besides the love for those adventures Bisca discovered another aspect of the game she found very interesting. Decorating! Specialized on ships such as sloops and war brigs, Bisca started to make plain ships more personal. The first few ships she gave away to her friends and pirates can find the ships in this forum thread.

Shortly after Bisca started this lovely game her birthday came up and she received her very first familiar, a tan monkey named Faith. This was the first of a collection she is extremely proud of.

Unfortunately, she and her boyfriend had a break up after being together for quite a while, for a week or two she didn't log in, but afterwards it would not stop her from playing the game. Her boyfriend changed his name and they rarely spoke again. This also changed something in Bisca's attitude. Hugging became acceptable and maybe even a nickname now and then. The friends she gained along the way, such as Zeevrouw and Machnak helped her back up and move on.

By the change of her attitude she became a little closer to the friends she had. Of course, the game still was the game and she would still refuse to mix the game and her real life up. But, even though that was the case, she started to "date" Paini on the game. In this time Bisca also found another fun thing to do; drawing. She made several avatars for people that requested and which can be found in this forum thread. Unfortunately that relationship didn't last long due the different time zones.

But then after a long while, on the docks of Admiral Island, she met a lovely man searching for her help. This man, Grumbler later became her boyfriend, soon her fiance and eventually her husband. Their dear friends Protects, Factors and Daftsadie helped them organize this wedding. They remained close friends afterwards. Unfortunately this marriage didn't last longer than 2 months. She's back to being happy single!

Bisca now still decorates ships but merely on order. She set a few goals for herself, which some of them she achieved. For now she is on long term trying to get all the serpent color combinations possible on this ocean. She wants to make portraits with different dolls, such as ghost doll, zombie doll, OM dolls etc. Also Bisca started to collect certain trinkets which can be seen when the link that is shown at her "Trinkets" tab is clicked.

Bisca has been running her own crew and flag for a while but found it too stressful and also rather boring. Thus she decided to join a friends crew named *Serpents*. But after that crew was sold without her knowledge she left and joined the lovely crew of Blackteach. Not too long after that her old hearty Muaddh became active again! Their friendship blossomed into a relationship and later on she was invited to join his crew and flag. Unfortunately this relationship also came to an end when Muaddh had become inactive again.

Now Bisca decided to make her own crew; Sexy Cute Dangerous and her own flag; Toxicated. This is a stress-free, no politics, no drama and hearties only(!) place to be.

Bisca wrote a journal for the meetup in 2014! To see it click here.