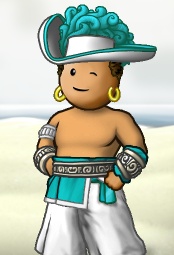 Ben was a former captain and navigator of the crew Skeletons and king of the flag Corripe Cervisiam on the Hunter Ocean.

Ben is a well rounded pirate who has been playing since before the opening of the Sage Ocean and now resides on Hunter Ocean. He is currently a senior officer in the crew Skeletons and king of the flag Corripe Cervisiam. He was formerly a prince of the flag Castigo X and governor of Paihia and Gallows Islands.

Ben is known on the Hunter Ocean as a pro-jobber pillage leader. This type of pillage may also be referred to as an elite pillage, one in which all jobbers have high stats and achieve excellent or incredible duty reports. They only go for the big booty on difficult routes where the booty can range from 4,000 to 18,000 PoE. However, currently Ben is involved with more war frig pillages which allow any skill level of jobbers to join as long as they can work. He also loves to plank those who oppose him and believe that by talking nonsense and lazing they are not contributing.