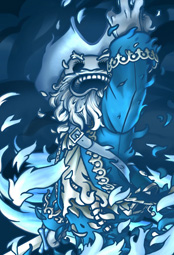 Barnabas the Pale is one of the original five Brigand Kings introduced to the game in April 2006. Unlike most brigand kings he can only be fought in a swordfight. During the swordfight a special background, unique to Barnabas, replaces the brigand king swordfight background. He is captain of the crew Eldritch Abyss and king of the flag Chthonic Horde on most oceans. On the Opal Ocean he goes by the name Barnabas der Blasse and is captain of the crew Abyssische Geister and king of the flag Chthonische Horden.