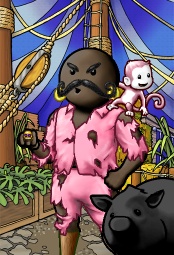 Azy washed up on the shores of Obsidian Ocean in 2017, though long ago he sailed the Midnight Ocean. He is a senior officer in the crew Inglorious Basterds and a lord of the flag Guerrilla Warfare.

Azy enjoys playing hearts, sailing, treasure drop, and spades. He also has a very good puzzle standing in bilging. He enjoys docktarting with friends, but particularly with his girlfriends Julie and Prosperity.

Azy, Julie, and Prosperity are heading towards their first month anniversary together. They are not sure how they will celebrate just yet, but Azy has something really brilliant in mind that he is keeping secret. They first met when Julie became enthralled by Azy's lips, of which Azy puckers. He does not duck face. He is a man. He is a man with body hair.

Azy is currently ranked as a senior officer and purser of the crew Inglorious Basterds on the Obsidian Ocean. He is a Lieutenant Commander in the Melanaster Navy.

Azy also thinks that he serves as a Lieutenant Commander in the Scottish Navy where he hands out light green striped shirts on the streets of Inverness. He is often escorted home by the local police force for disturbing the peace, but Azy's good soul just wants to hand out shirts to the public.

Azy has no stalls or shoppes to call his own. Azy owns a shack on Port Venture that he acquired in the "Get Loot for your Home" mission.

Azy is often found in strange locations on the Obsidian Ocean because he follows his pet pig named "Riverdale" around without question. Azy has not yet been made aware that the pet is not controlled by an actual human, so please do not tell him.

Azy yearns to collect as many knobby corals as possible.

He is currently applying to become a member of the Macadamia Jubilation Congregation which is led by Reverend Julie.

Azy spends his free time chasing his British bull dogs around in circles for hours on end while incorrectly singing "taquito, taquito" along to the pop hit "Despacito" featuring Daddy Yankee.