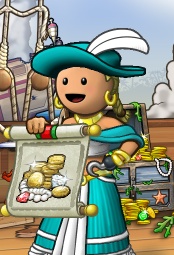 Astrida is the captain and diplomat of the crew Outtamyway in the flag Sea Change.

Astrida was created in January 2007 and originally joined the crew Greek Armada subsequently moving to Hellas under the captaincy of Crx. In the summer of 2007 she moved to the newly formed crew Chaos's Destiny and rose to through the ranks from officer to senior officer and first mate, subsequently proudly becoming a lady in the flag Sea Change.

She started becoming interested in trading in the summer of 2008 and manages a number of stalls with Thomie.

Outtamyway has since joined the flag Sea Change and in December 2010 the crew decided to go back to their original name of Chaos' Destiny. Astrida is currently a Princess in Sea Change