Difference between revisions of "Astrangel" 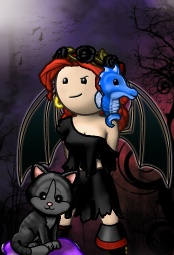 Astrangel is a pirate on the Viridian Ocean. She is queen of the flag Fire and Brimstone and senior officer in the crew Sons of Odin.

Astrangel has been playing Puzzle Pirates on the Viridian Ocean for less than one year, on this pirate. During this time she has managed to achieve a lot. She is senior officer of her crew, Morrigan's Guards, which she built with Mrblaze. She is also known for her executive officer skills in sea monster hunts and blockades.

Astrangel started out in the crew Sons of Odin, she made her way up Puzzle Pirates community, showing respect to others, working hard and improving her skills. Currently Astrangel works on the crew Morrigan's Guards as a senior officer. She has been very strong and very friendly to others - Astrangel is one of the most hard working pirates on Viridian.

She enjoys life in her new crew Morrigan's Guards and tries her best to make it a fun and enjoyable crew. Doing her duties within the crew and flag and helping allies is what keeps her motivated in being a good pirate.

Astrangel, or Angel as she is fondly known as, is the driving force behind Morrigans Guards. She may not be captain but she's the one who keeps it going. Providing for her friends and crew and flag in whatever they need.