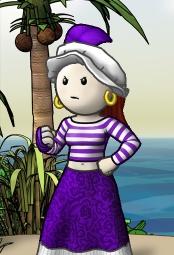 Annecormac was born on the Sage Ocean on September 15th, 2005 on the docks of Greenwich Island. She currently calls Scrimshaw Island home in her lovely mansion.

Annecormac started her piratey career as a member of The Caravel Corsairs and worked her way up to become a fleet officer in the crew. She left The Caravel Corsairs to join and be one of the founding members of Purple People Eaters on January 21st, 2006. When Than, the founding captain of the crew, had to leave the game due to changes in real life, Annecormac superceded his role as captain on February 13th, 2006 and still holds this position today. Currently she is lady of the flag Tea and Strumpets. She finally finished memorizing the Sage Ocean on March 11, 2007.