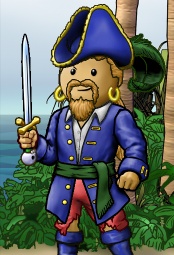 Althalus joined Puzzle Pirates a week after beta started and immediately joined the crew Band of the Hand led by Brownbeard. After time he became an influential member of the crew and became one of Brownbeard's trusted adviser's along with Cokes, Juanita, and Samiam. He had been running a set of forums for the crew when they joined Crimson Tide in Azure. He modified the forums for use with the flag and they were welcomed by all and was made an honorary titled member for his efforts.

When Midnight went live he was one of the founding members and stayed with the crew during and after the turmoil that split the crew from Crimson Tide. Many expected him to take over the crew when Brownbeard finally left, but that burden fell upon Samiam instead. Althalus remained a trusted adviser to Samiam, however. They created a new crew in honor of new beginnings and named it The Phoenix Warriors and joined up with Greenwolf and Tyr's Own.

Still a member of the crew as a Sr Officer, he has long since retired from the game, popping in as he does from time to time to check on his crew. He still runs the forums for his flag to this day, though the every day hassle is now handled by Cioj and Sweetiepiepi.