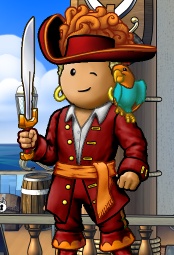 Ajani found himself washed up on the shores of Turtle Island. He was a new and confused pirate, unsure of what to do. Doing what every new pirate does, he looked for a way to make money. After jobbing with many crews, he found a friendly, informative crew known as the Puzzle Pirates Academy (PPA), flying the flag of Rudder Revolution. Their name led him to believe that this crew would be a great place to learn the ways of the game, and to get off to a good start. Within days of joining, his captain, Faile, saw his potential and advanced him to officer in training. He quickly completed the training program and became a core training officer in the PPA.

Around this time, Gaea was bought by Rudder Revolution and Ajani moved with his flag to their new home. There was much hardship and work to get the island up and running, but it was shortly made fully operational.

The rank of senior officer became vacant and Ajani was given it after playing with the PPA for several months. He was an important part of PPA and was soon given the title of first mate, along with his good friend, Lilyara (Lily). He and Lily were Faile’s right-hand mates for a long time.

When Azure closed and the Midnight Ocean opened, Ajani was one of the extremely active mates in the PPA. Within the first day of Midnight, Ajani and a group of four mates bought four ships to be used in the crew. However, there was unrest in the crew. Several of the senior officers disapproved of the way the crew was becoming. It was a lot of work to run a training school for a game that was just for fun. The crew began to deteriorate. The captain decided that she didn't want to run a training school anymore and formed the crew Falcons O' the Seas. Ajani seized this opportunity to do something he had been yearning to do for a long time: form his own crew. He named it the Rudder Rebels.

The Rudder Rebels were not a popular crew at first. They were pushed about by many of the captains in the flag, including high ranking officials in the flag council. Within one week, the Rebels became the third-biggest crew in the already-large Rudder Revolution flag. Though a powerful crew, Ajani felt he was left out of several important flag decisions and that his crew got the short end of the stick in flag events. Ajani talked to his monarch Pennsuedo one day about eventually starting his own flag. Pennsuedo, having received much pressure from his peers in the flag council, informed Ajani that the "time to do it is now". Ajani believed he was doing the right thing by informing Pennsuedo of this desire. Pennsuedo viewed this as bravado and was offended. He then expelled the Rebels from the Rudder Revolution flag.

Not having a chance to inform any of the crew about this, Ajani was dumbfounded; he did not expect this to happen so quickly. Ajani’s first mates, Daaman and Bunnywonder, logged on and saw their crew was no longer in the flag. They threatened Ajani with mutiny if he did not get the crew back into the flag. Much of the crew was still loyal to the Rudder Revolution and told their captain that they would leave. Ajani knew that he was disliked in the flag council and felt that if he remained at the helm, the crew would not be permitted to reenter the flag. To make his crew happy, he stepped down as captain and handed the hat over to Daaman. Daaman brought the crew back into the Rudder Revolution flag, and it was taken under control of Pennsuedo. Shortly after this, the crew merged into Faile’s crew, Falcons O' The Seas to form the crew Falcon's Fury.

Ajani was disgusted with what had happened in his flag. He decided to form a new crew, and to stay as far away from Rudder Revolution as he could. He created the crew The Blade's Edge with every intention of staying independent. On the docks of Guava Island one day, Ajani ran into a monarch by the name of Parthanos. Parthanos informed Ajani that he quite respected him as a captain and was upset with what happened to the crew. He offered Ajani a fair amount of help with his crew, gave Ajani a spot on his message board, and offered to help with his recruiting.

Ajani soon decided that it would be in his crew’s best interest to join on with Parthanos' flag, Imperio. A mate from Parthanos' own crew, La Giustizia Implacible, stepped up to offer his blade to Ajani's cause. This pirate, Terestardae, joined The Blade's Edge as an officer. He made his way up the ranks and swiftly joined Ajani's side as his first mate. The crew was still small; there were relatively few active mates and Terestardae's patience waned. Without any notice, Terestardae left The Blade’s Edge to form his own crew, taking 2 of Ajani's ships with him. Ajani felt that the crew was a failure and did not have much support any more. He realized that he was the only active member of the crew and decided that he would disband it. He did not, however, know where to go to find mates as active as he was.

He remembered his friend Cayte, who had recently left Rudder Revolution to join up with the crew Black Death. Ajani asked Cayte about joining Black Death, though he considered his application to be a long shot During the conversation, Cayte told Ajani that he should speak with the ranking officer online, Faramir. He did, and his run with Black Death began.

Ajani stayed in Black Death for eight months, making many friends, yet also many enemies. After a long time in the crew, he asked the captain, Complicated, for a more central role. Realizing that gaining a spot of this power would be nearly impossible in such a big, famous crew, Ajani started forming a plan to create his own crew. He made friends with Yuna, who was in the same flag as he, as well as Epoxy and Xerox, who were from the flag Marine Knights. Early in the planning stages, he ran into a greenie named Caesar, who claimed to be an old beta tester. These members joined together and, on May 9th, 2004, he left Black Death and created the crew No Quarter Given.

No Quarter Given briefly weighed up their options, and joined the flag Looterati. On July 25th, 2004, Ajani married his first mate, Yuna. The ceremony was performed by their friend, Squid. The crew was happy to remain in Looterati until two of Ajani's senior officers announced their plans to form a crew of their own. Caesar and Unixmonkey planned to recreate their crew from Azure, The Red Hand. Not wanting to split from his friends, they hatched the plan to create a new flag. They worked secretly for a short while, not wanting to upset their friends in Looterati, and find other like minded crews to start it with them. On August 3rd 2004, The Uprising was born.