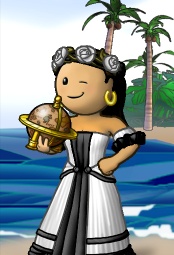 Aethera is a senior officer and strategist of the crew Axis Analemma and a princess of the flag Maniacal Menagerie on the Cerulean Ocean. She prides herself on being in the same flag and crew as her oldest friends for the entirety of her pirate career, which began in 2005.

Formerly of Cobalt, Aethera enjoys blockade planning and strategy, and often hires herself out as blockade staff. She has extensive experience as Admiral, Land Admiral, Jobbing Contact and XO.

Since her favorite puzzle is duty navigation, she favored the ocean merge because it gave her the opportunity to memorize a new ocean. She finished memming the entirety of the Cerulean Ocean on June 17th, 2012, nearly 6 years to the day after she finished memming the Cobalt Ocean. She also spends a fair amount of time charting for other folks engaged in memorization.

Outside of the game itself, she's an avid player of Rogue OM Squad, or ROMS, and has moderated several games, including Vanilla Vacation and Gorilla Villas (Vanilla!) Recently, she and Furare moderated a Cluedo-themed game. Aethera is also a compulsive reader of all forums, whether they're related to her own ocean or not.