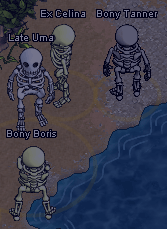 Skellies (or skeletons) are non-player pirates that can be challenged to swordfight brawls. They can spawn in groups on islands, or can be summoned to a location with the help of special skellie charms. They are one of four types of fray-based monsters; the other three being zombies, werewolves and vampirates. Skellies that are defeated will distribute Pieces of Eight and trinkets to the victors, before fleeing the island. One fortunate pirate will receive a Sea Monster Hunt map. 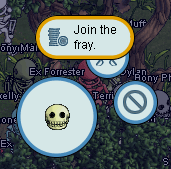 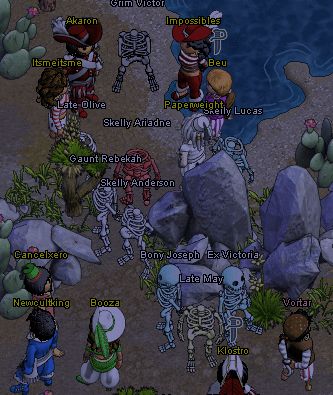 All winning pirates receive an equal share of PoE; 1,000 PoE per skellie, as well as all fray entry fees that have been collected (this may include previous frays). One randomly chosen pirate will win a random map to a Cursed Isles, Atlantis, Haunted Seas or Kraken location. That pirate does not have to survive the fray to be awarded the map.

This mission, as well as the Defeat the zombies!, Defeat the werewolves! and Defeat the vampirates! missions, is a way for a pirate to explore islands which would be otherwise difficult to reach. Since islands which are visited once are memorized, pirates who regularly go on these missions are likely to have many islands plotted on their known world map.

Prior to an unknown release before 2006, skellies may have also quoted another line from the same movie and book: