Tournaments allow many hosts of Pirates to pit their skills against one another, sometimes for exciting prizes and wagers! Tournaments are usually open to all the players in the Ocean, but can be open only to local participants. To find a Tournament board visit the Inn or a Palace: 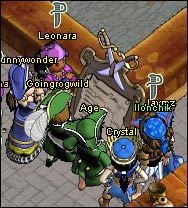 From the tournament board ye can create a new tourney, inspect and join one that's about to start, or inspect the brackets (competitors and their positions) for a tournament in progress.

To create a tourney you choose the game and rules as follows:

It's helpful to note that these go in order of prize sharing from most to least.

Playing in a Tournament

If you click on an established tournament you will see a box with the tournament settings and the names and skill-levels of all pirates who have entered the tournament. Once you've joined the tournament from this panel it can be dismissed. Please note that you commit any wager required when you enter a tournament, so bet carefully!

An Ahoy! panel will show for a Tournament you have entered, allowing you to inspect the status and see the number of matches left before the next round.

When the tourney commences the brackets, which is the order of who plays who, is generated based on the player's ranks, and may be seen from the tourney board or the 'status' button that appears in each competitors Ahoy! panel.

Playing out the Tournament

The puzzles will begin automatically, regardless of where competitors are standing or what they happen to be doing at the time (any puzzle that they are in already will end). Likewise you will automatically receive any winnings, should you be so lucky!

If you log out or disconnect when it comes to your next match then you will forfeit the match. If you are engaged in another Puzzle, however, then the Tournament will pull you out of that Puzzle when the next round begins.