Booty ramp is the increase in booty from each successive brigand/barbarian during pillaging.

The factors known to affect how steep the booty ramp is are:

Note: duty reports have no effect on the booty payout. It is worthwhile to note that each of these factors have their own caveats.

Once again, this does not refer to the duty report. It refers to each player's skill in puzzling, specifically the piracy puzzles. A sloop with a crew of six that are renowned in every piracy stat would weigh less towards the booty ramp than if all six crew members were are grand-master or legendary in every piracy skill. The Swordfight and Rumble rankings are given a heavier weighting towards this factor than those of other puzzles, meaning the ability of the crew in melee is more important individually than their ability to perform, say, Carpentry.

As one would expect, the harder a brigand/barbarian is, the more money on average they will pay out in booty when defeated. This also accounts for the type of ship itself; clearly a longship will net more booty (on average) than a cutter.

This does not mean that it accounts for how many people in the crew are aboard, but simply how many people are aboard that vessel. As one might assume, more is better in this case, which is Puzzle Pirates's way of counter-balancing the fact that the booty will have to be split between more people. Greenies are included in the count, but swabbies are not.

The effect of crew changes can be partly reduced by having the pirates remain aboard until the next target ship spawn is sighted, and then by switching out the leaving pirate for the one taking their place.

Amount of booty in chest

It is not known whether this factor survived the most recent iteration of game design changes.

This is also fairly intuitive. If the last battle was a clear victory (losing only one or two crew members in the melee on a war brig or otherwise completely defeating the opponents), then the next spawn will be tougher to try to gauge how powerful the player ship's crew is. Likewise, a resounding loss, such as losing all crew aboard without killing an opponent, will drop the booty ramp significantly. Barely winning, for instance dropping to 2 or 3 pirates left standing at the end of the melee, keeps the ramp roughly static. 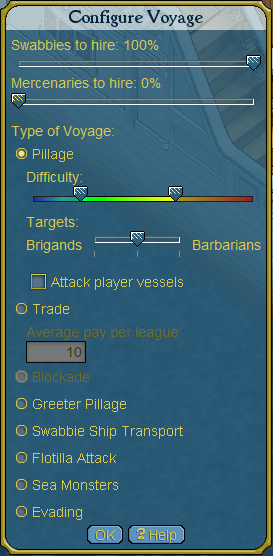 As explained on the Navigation page, when pillaging, the score obtained for Duty Navigation causes the ship spawn to be closer to the range that was specified in the Configure voyage menu. The better a navigator performs, the closer the actual ship spawn will be to the desired one. As navigation also increases the frequency of ship spawns, it can often be in the pillagers' best interests to have a talented navigator. The voyage will have the highest income if the Configure Voyage slider is set to the hardest difficulty that the crew can reliably beat. Note that the Configure Voyage slider works best when the difficulty selected is similar to the difficulty of the route along which the ship is sailing. Selecting a very hard setting while sailing a very easy route has the unintended effect of reducing the number of spawns received.

Like it or not, this is all connected to the universal random number generator known as luck. There are some brigands that will net a player ship far more than expected, and others that will net much less than expected. This is the one factor which cannot be controlled or affected in any way by players.

Size of the opponent's ship

With the release of new ship types of varying difficulties to fight, a modifier to payout was added to account for the added difficulty of fighting certain ship types. The full details of the modifier are not yet known.