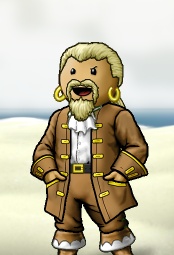 Arcturis is a pirate and profiteer on the Meridian Ocean. He is currently a fleet officer and formerly the captain of the Rum Running Dragons, and king of the flag Demons and Damsels. He is also the principal developer behind the Puzzle Pirates Trade Profiteer.

Arcturis first came to the Viridian Ocean as a humble pirate in early 2006. He joined up with the now-disbanded Red Waters of Evil under the command of Piracy. He would work his way up through the ranks, becoming a Senior Officer.

Eventually Tegasus Flyers would disband, and it occurred during an extended period of time when Arcturis was offline. When he returned to the ocean, he found himself without the crew that he needed in order to sail his three ships. Rather than shop around for a new crew, he formed his own: Antalon.

Antalon was founded October 18, 2006, strictly for solo pillages and commodity runs. It was just a one-man crew, Arcturis, and his three ships.

On December 3, 2007, Arcturis was out on a commodity run when he found himself cornered off the coast of Lima Island by a young officer named Aapatti of the crew the Rum Running Dragons. After he identified himself as a friend of the crew, Aapatti agreed to stand down and allow Arcturis to disengage.

A comment in passing to Aapatti, "Tell Froggi that Arcturis says 'Hi'", led to a meeting and reunion with fellow Viridian Captain and friend Frogpirate. Arcturis was welcomed to the ranks of the Rum Running Dragons by approving the merger of the Antalon crew.

He was asked by Frogpirate to take over the crew and assumed command on Christmas Day, 2007. Some changes were made right away. The crew was changed from oligarchic politics to autocratic, and more detailed rules were implemented. There was no apparent objection to the new command.

Shortly after assuming command, Frogpirate left the crew to join up with Dark Demons, a sister crew in the flag. With a vacancy in the Senior Officer ranks to be filled, Arcturis commissioned Leasey a Senior Officer and First Officer of the crew, citing her experience and levelheadedness as good qualifications.

A couple months later, Arcturis was voted King of Demons and Damsels. The decision to name him King was relatively unopposed. He was the most active officer in the flag at the time of the vote, and seemed to have the best mind for the job. After being confirmed as King, his first action was to abolish the "2 royals per crew" rule in place by elevating Leasey to royal status.

As King, Arcturis engaged the flag heavily in Viridian Ocean politics in 2008, joining with several other flags in an alliance organization and participating in blockades. During this time, he also set up a large, successful forage operation comprised of two grand frigates and two merchant galleons. One of the grand frigates was given away in a tournament after he decided to unwind his forage operation due to an increase in competition and a decreasing ability to manage it.

The crew has since fallen into inactivity with practically everyone in the crew being dormant for an extended period of time. Arcturis has since handed the captain's post to another pirate after demoting all officers to Fleet Officer or lower, then taking the lower rank of Fleet Officer for himself while retaining the monarchy over the flag. This allows him to still operate as a profiteer on the ocean and work with his ships with little encumbrance (including the unlocked ships from his dormant crew mates), but only needing the Officer badge instead of the significantly more expensive Captain's badge.

During his time on the ocean, Arcturis has managed to amass a collection of custom named and limited edition ships. All vessels are on the Meridian ocean.

* Free Katara is a 2005-edition cutter with the Drinking game below deck.

Emerald Ocean and beyond

With the ocean-wide economic crash that befell the Meridian Ocean, courtesy of doubloon prices skyrocketing to easily 6x what most would likely consider reasonable, Arcturis decided to establish himself better on Emerald. He initially had a pirate on both Sage and Hunter, but the Hunter character was retained, placing him on Sayers Rock. After earning some PoE participating in blockades and pillages, he decided to transfer to Arakoua Island and purchase a cottage.

Prior to that, much of his time was spent earning the necessary experience levels to create a new crew, which has thus far yet to occur, and establish himself on Emerald as commodity trader while waiting to see if Meridian picks back up again.